The next ICT4SILVER workshop will receive testimonials from local companies and organisations on the development of Silver Economy related products in Europe.

Entitled “SME experiences when testing their products/services in transnational markets”, a new workshop will be held on Tuesday 4 December, open to the public at the Gaia headquarters in Bilbao. The event, which you can attend after registering, will try to bring together the experiences of several local companies that develop products and services, including Ideable, in order to respond to the needs of the European Silver Economy market.

Four organisations and projects have joined forces in organising this workshop. On the one hand, the European project ICT4SILVER, which was founded in 2016 with the aim of applying technological innovation in the ageing process, within the framework of southwest Europe.

Another major stakeholder in the combo is the GAIA Electronic and Information Technology Cluster in the Basque Country, which will share with attendees several of their success stories, as is the case of Ideable with Kwido.

To close the loop, Grupo SSI is participating with its innovation division, Home Care Lab, in addition to the Basque Country’s leading technology corporation, Tecnalia.

The aims of the ICT4SILVER workshop are to present the project to the attendees, and to give examples of the support provided to participating stakeholders in the form of pilot projects and living labs. Following the presentation of testimonials, we will discuss the methodologies used, the support received by the project and the identification of possible improvements for the future.

Ideable will focus on Kwido, as one of the solutions selected to be tested in real environments in different European countries. The tests have focused on remote health monitoring functionalities, part of telemedicine services, and the pilot tests have been carried out at the Agence de Développement et d’Innovation de la Nouvelle-Aquitaine (France) and Santa Casa Da Misericórdia Barcelos (Portugal) organisations.

To do this, Kwido has adapted to different versions and languages for the testing process in its international expansion, in order to achieve the same success that it already has in the national market.

Want to know more about the projects that Ideable is participating in? Subscribe to our newsletter, and follow us on social media.

Last September, the international event AAL FORUM was held at the EUSKALDUNA CONFERENCE CENTRE in Bilbao from 24th to 26th and IDEABLE, TECNALIA, IHOMELAB and EXTHEX, some of the partners from zocaalo participated there.

In fact, IDEABLE and EXTHEX participated in a workshop in the AAL Forum that was organized the 26th. In that workshop, both companies described the goals of the zocaalo platform and the main aspects of the certification process, as shown in the picture below.

The most interesting points for the audience were the possibility of getting help on how to design accessible apps for the elderly users and the access to possible end-users to test those apps before being launched to the market.

The zocaalo project was also presented in the booths from some of these partners, specially in the IDEABLE’S stand in which, apart from the visible roll-up of the project, many visitors could take some of the flyers describing the project and inviting developers from the AAL community to join our certification process. 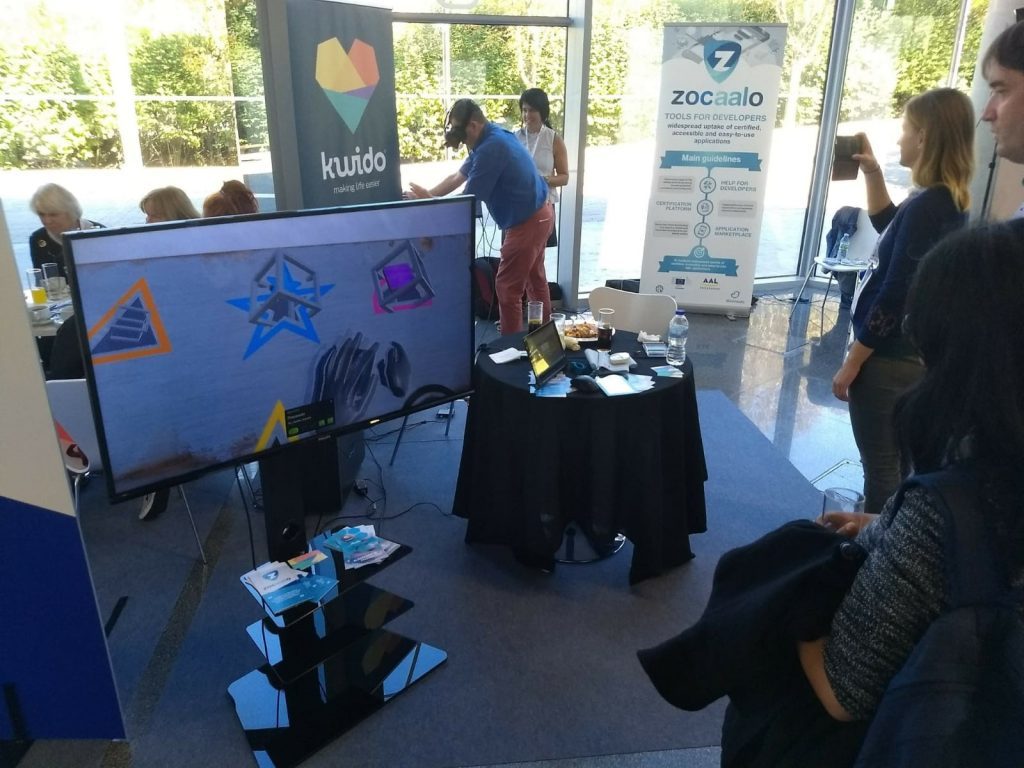 But those were not the only moments dedicated to zocaalo during AAL Forum. In the hackathon HACK4ELDER advantage that took place in Bilbao too but the weekend before AAL Forum, zocaalo was one of the sponsors.

During that hackathon, zocaalo was present in two innovation pills: one by Javier Arcas from TECNALIA, presenting some of the most important guidelines on how to design accurate apps for the elderly people, and another one by Iñaki Bartolome, from IDEABLE, presenting the zocaalo seal and its certification process.